Two RK07 are owned by me, and both are not in use as I need the time to overhaul and test them.

Only basics were done, like cleaning the belt, the spindle, the engine and reforming the big caps, followed by charging/renew the emergency head retract accumulators.

Afterwards a short power on test was performed, and both drives performed them well.

The biggest problem is that the belt has not moved over the spindle for the last 20 years or so and both have started to decompose each other. 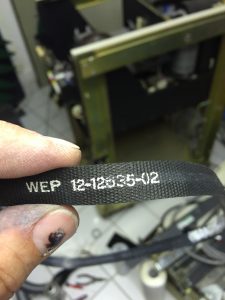